It might not be legal to do so in your state (many states require on-site euthanasia or on-site release), but if you've trapped a raccoon and wish to relocate it, you should keep a few things in mind. First, bring the raccoon at least five miles from the capture site, preferably ten. Otherwise, there's a good chance that it will track its way back and cause the same problems as before. Second, don't leave the animal in the cage for too long - this is a stressful time and the animal becomes dehydrated. You can give it water through a hose if it's been trapped for a while. Don't bother with food, it's not interested in eating. Maybe wet food, like orange slices, will do. Third, be careful when handling the cage, and don't stick your fingers inside the bars. Be careful when releasing the animal - it won't attack you, because its primary concern is to get away as quickly as possible. But don't compromise your safety by cornering the animal when it has access to bite you, which it would never do unprovoked, but would do out of self-defense.

You might also want to read these pages after you read the below advice:
Raccoon Trapping Guide - professional advice from me, with over 800 raccoon captures to date.
How to Tell if a Raccoon Is Sick - before you decide to relocate or not.

What type of area to relocate to? First of all, laws may prohibit the release on public lands. As for what area is best for the animal, that's a matter of debate. A lot of people think the raccoon should be taken out to "the woods". Many people suggest an undeveloped area with water sources nearby. Still other people argue that animals caught in urban or suburban areas are used to such environments and will fare better in such areas - but they will probably cause the same problems they caused in your area. I think that relocation is hard on animals, no matter where they go. They are used to their home territory. A wildlife rehabber wrote me this: "The only problem is that we do not recommend that people take them off and release them. We want them to stay in their own territory especially with babies! We recommend they fix the whole and then release them right there, The research shows that the survival rate for the first 2 weeks in a new territory is poor. I can't imagine it better with babies also. And if you remove someone from there home someone will just move back in. I suspect this is where people feel they travel miles to return home. I am sure that some do but I suspect it is another animal moving in."

What about baby raccoons? I mention on my home page relocating babies if you have their mother. A rehabber gave me this advice: "As far as releasing babies after the mother bolts, I would not recommend that unless the babies are mobile on their own and even then, if you have two traps of animals, release the babies first, then the mother/babies. The tiny ones are sometimes abandoned if the mother is inexperienced so I would add that people should check the release site daily until they are sure the babies have been retrieved. Encourage people to leave the babies in their yard because the mothers (both raccoon and squirrel) have alternate den sites already in reserve. And then fix their house. Also, when leaving helpless orphans as bait, they need a heat source. Double bagged hot water (zip lock bags) or a jar of hot water that the babies can move toward for warmth will usually work, though monitoring is required to make sure the mother has come back for them which can take more than a day if her alternate is a long distance away. Raccoons take them one at a time and usually move further away than squirrels. Squirrels also take them one at a time but won't touch them if they are cold." 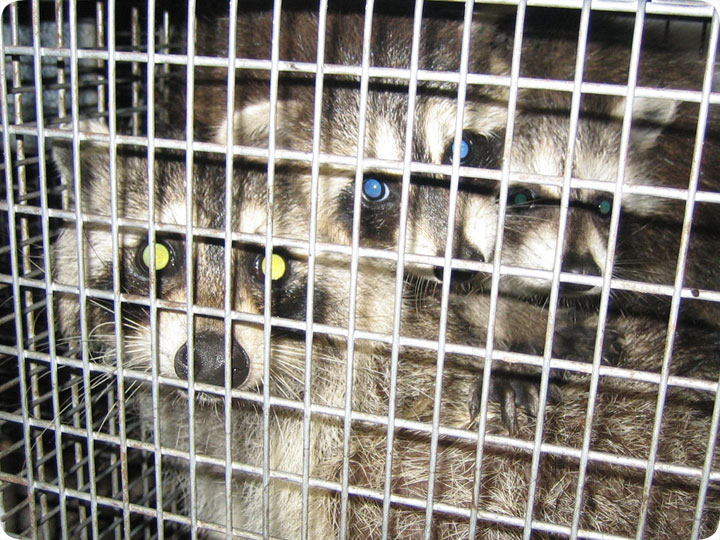 If you want to enlist the help of a professional, I believe that most of the wildlife control operators listed on this wildlife removal directory, which includes listings for 450 US cities and towns, do a competent job. I've also compiled a list of good raccoon experts in several major US cities, including Charlotte - Fort Lauderdale - Miami - Seattle - Portland - Oakland - Los Angeles - San Diego - Phoenix - Dallas - Houston - Denver - Cincinnati - Baltimore - Nassau County - Jacksonville - Orlando - Tampa - Boca Raton - Chicago. But before you hire anyone, be sure to read this guide and gain a good understanding of the matter at hand, and ask whoever you wish to hire the right questions, and be sure that they remove the baby raccoons as part of their wildlife control solution!

What to do with a raccoon that has been caught - If you caught a raccoon, most state require you to kill it or release it—you’re probably not legally allowed to catch it in the first place. If you do have the special licenses that allow you to capture a nuisance animal, you need to make sure you follow local laws about relocation versus termination. Raccoons are known carriers of rabies, and because of the potential health risk of handling, transporting, and relocating the animals, most states require them to be killed if captured. If you have no mind for the legalities of catching a raccoon, you need to make sure you relocate it at least five miles away if you don’t want it to come sneaking back into your home. The ideal distance is ten miles for relocation, but if five is all you can do, it’s better than nothing. Something to keep in mind when you’re trapping the adult racoon in your house is that most of these critters in human homes are females. They have left the forest to have their babies in your building. If you’ve caught a female, you need to scour the house to find her litter. While leaving them in the house to starve is cruel, you’ll doubly regret the decision when their remains start to decay, stinking up your home.

Read more about raccoons:
Are Raccoons Dangerous to Cats, Dogs, or Other Pets?
What Equipment Is Needed to Trap a Raccoon?
Is Raccoon Feces Dangerous/Toxic to Touch or Breathe?
Should I Feed a Baby Raccoon I Found?