Raccoons in the Chimney - Guide to Removal

Raccoons live in chimneys as well as attics. Your chimney is just like a big, hollow tree to some animals. Raccoons are great climbers, and they need a safe, dry place in which to live, so if your chimney has no chimney cap, get ready for some visitors! Female raccoons instinctively seek out high areas in which to create a nest. Because raccoons are so common in urban areas, they often climb on houses and other buildings looking for a good place to set up a nest. It's not uncommon to see a raccoon on the roof. If they see an open chimney, that's a great place to pick in which to set up a den. They can easily climb down the flue, as seen in the above photo, and they usually set up a nest and have a litter of baby raccoons at the bottom. 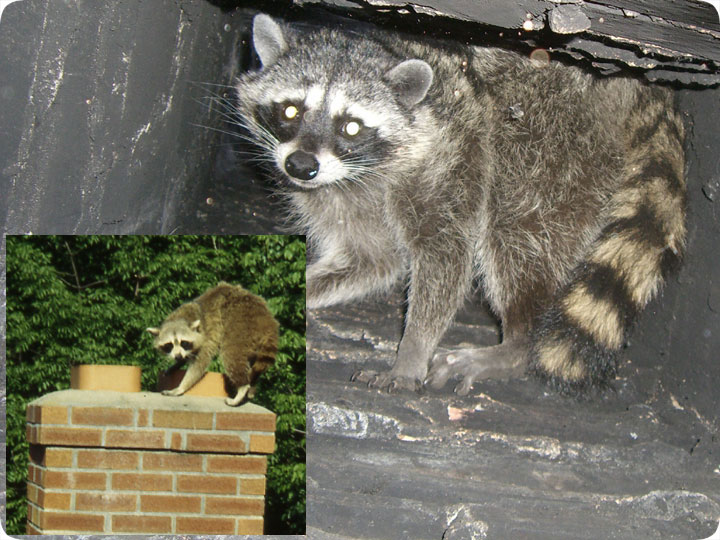 DO NOT START A FIRE if you have raccoons in the chimney - you’d have to open the damper to let the smoke out, and they will enter the fireplace instead of climbing out. Even if they don’t get into the your house or fireplace, you will cook animals alive and get a horrendous odor that will last a long time.

If you have raccoons in the chimney there's several things you can do. Odor deterrents such as predator urine or raccoon eviction fluid might work, because it's a very concentrated area, as opposed to a large and well-ventilated chimney. The best is to set a special chimney trap at the top of the flu, which catches the raccoon as it exits. If there's babies inside, they can then be safely removed by hand. You can also set a ground trap at the base of the chimney and do the same thing, though the capture rate may not be 100%, like with the chimney trap. You can scare the mama out and remove the young, then use the young as live bait. Or, you can use a long chimney snare pole to grab and remove them all. Many professional wildlife removal experts have special raccoon in chimney removal systems if odor deterrents don’t work. Just remember to get the babies as well as the mother!

If you open the damper, you may end up with raccoons in the fireplace. If they actually get into the house, stay away, and open doors and windows right away, and let them leave on their own - don't try to corner or fight the animal, because it will likely defend itself.

Finally, once all the raccoons are out of the chimney, install a sturdy steel chimney cap to prevent this from happening again. Oh, and if you don't have a cap right now, make sure the fireplace damper is closed, or else critters may wind up inside your home and not just the chimney.

How do I get baby raccoons out of my chimney - There are going to be two different kinds of baby raccoons in your chimney. There will be tiny, newborn raccoons or there will be larger, adolescent raccoons. Either way, these little guys can be handled with gloves, but the trick will be getting them out in the first place. First, you need to get the adult out of the chimney. Attaching a special trap at the top of the flu will catch the adult. If the babies are adolescents, you can sometimes get them out of the chimney with this method, too. With the trap attached to the top of the chimney, you can chase the adult and any older kits up and into the cage. Very young babies that have not really started to climb will be sitting on top of the damper. You can use a mirror to view above the plate before you reach up to grab the little guys. Whatever you do, you do not want to start a fire. More often than not, this makes the raccoons take the quickest route of travel. Because your damper is open at this point, that route of travel is going to be into your home instead of out the top of the chimney.

How to remove racoons from chimney - Of all the places to have racoons, the chimney is one of the easier places to get them out of, provided it is in good repair and no holes into the top part of the home exist. Some homeowners are not aware of damages that exist inside of the chimney, so be prepared for potential complications. To trap your raccoons, a special cage trap needs to be attached to the top of the chimney flu at the roof. Using a pole, you can encourage the adult raccoon, usually a female, to leave the chimney and be caught in the trap at the top. Now, any babies that are living on top of the damper can be retrieved with your hands—just wear gloves. Adolescent racoons may be easy to handle but they can be just as likely to bite as an adult. What you do not want to do is open your damper prior to removing the creatures or start a fire. Both of these mistakes might result in raccoons loose inside of your home. If you need to determine how many critters are left in the shaft, use a mirror with a long handle to peer above the damper.

Learn more: How smart are raccoons?

Reader Email Hi David, My name is Jason and I own a Pest Control company in Houston Texas. I have read your website and really appreciate your methods and appreciation of wildlife. I am doing my best to operate my company in a humane, responsible manner when trapping wildlife. I currently have a coon that is giving me fits. It is living in a chimney. Ive tried to catch it using white bread and marshmellows, and Ive throughly inspected the fireplace and flue and found no babies, so I cant use live bait as you suggest. Do you have any ideas of where I should place the cages and what bait I should use. I am currently setting the cages on the ground outside the home where I believe the animal is coming off the roof and into the chimney. Should I try placing the cages in the fireplace? What type of cage should I use. I am currently using Have-a-heart raccoon cages. Any help you can give me would be greatly appreciated. Sincerely, Jason

My response: Jason, thanks for writing to me. I get inquiries from several wildlife removal companies. Raccoons can be very tricky. It sounds like you have a trap shy raccoon. Setting cage traps on the ground will not work. The type of bait does not matter - they eat anything, and a raccoon that has never seen a trap might even go in just out of curiosity. Also, traps set inside the fireplace absolutely will not work. You need to isolate the area that the raccoon is using to get in and out of the chimney, and mount a trap directly on that area to catch it as it comes out. The large Havahart is fine - the type of set is what is crucial - get on that roof, get some heavy gauge steel mesh and screws, and mount it right!