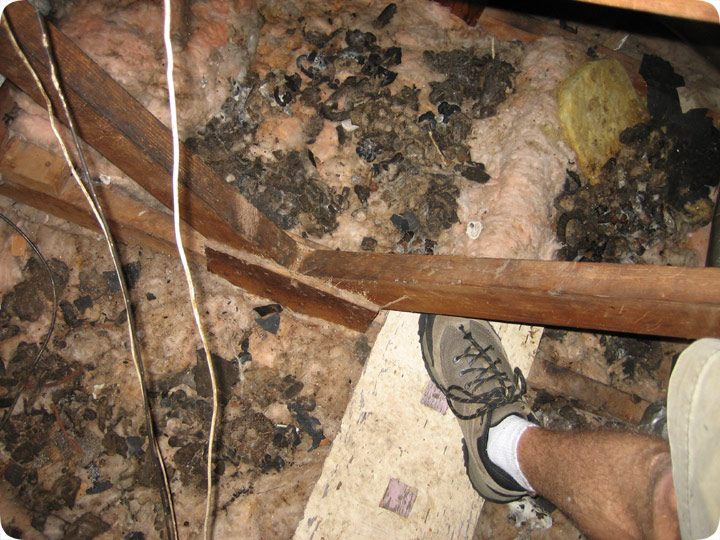 This is a photograph of raccoon fecal contamination inside an attic.  Do not touch raccoon feces.

Raccoon feces disease - Of all the animals that invade your home, the raccoon has a relatively small list of hazardous feces diseases. That’s not to say you should toss around raccoon droppings with your bare hands, but you don’t have to worry about the thirty illnesses you do with rodent waste. The most common diseases associated with raccoon droppings are roundworm and giardia. Both of these are intestinal parasites, though the roundworm is the only one of the two that can be seen by the naked eye. A roundworm lives in the intestinal tract, feeding on the lining of the intestine. If severe enough, it can cause hemorrhaging and thus bloody diarrhea. Some animals and people become so overrun with the parasite they vomit up live worms daily. The giardia parasite is a protozoan and is very common in most areas of the world. This microscopic organism becomes an issue when it overpopulates the intestinal tract, often resulting in persistent watery stool. While you should be concerned about these two illnesses, most people associate raccoon with rabies and leptospirosis, two illnesses that are deadly if left untreated. Rabies is always fatal if it incubates in the body. If you’re exposed to a raccoon, seek medical assistance immediately. If you want to see photographs for identification, click here for raccoon droppings and feces.

My name is Scott and I work with some wildlife rehabbers here in New York. I’ve been certified by our state DEC as an NWCO, but I’ve been inactive…I mostly use my license to legally trap raccoons (when necessary) and deliver them to a specialist rehabber.

To make a long story short, we’ve got a neighbor who routinely traps adult raccoons and leaves the babies. I end up having to recover the kits after they come out in public, distressed. In the process of one recovery last Saturday, I unexpectedly got nailed in the face with the dirt / hair / debris from a soffit at a moment that I wasn’t wearing my mask.

I’m now taking Albenza / Albenzadole as a precautionary measure for raccoon roundworm, but frustratingly, there isn’t a doctor here locally who claims to know a thing about roundworm and I’ve essentially been trucking around printouts from the CDC and Johns Hopkins sites.

Have you ever had to take Albendazole? The info online is very clinical, so I’m just looking for other users’ experiences.

Scott - I know nothing about roundworm or Albendazole, but I myself have worked with raccoon feces for many years, sniffing and even ingesting it, without incident. - David So I guess Albendazole is some sort of medication used to kill parasites.